Maxell Shean was an Australian Officer serving with the Royal Navy. In his account, he describes German U-boat tactics and the Royal Navy’s intelligence gathering and techniques for escorting Convoys through the Straits, along with the use of radar to detect enemy submarines. He relates his impressions of life ashore in Gibraltar: swimming, shopping, drinking and visits into Spain and the bullring. He talks of wine, sherry and port obtained from Spain and the smuggling and bartering with British beer. Finally, he relates a tale of sighting a submarine in Gibraltar harbour. 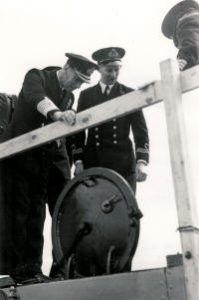