Albert Poggio is the Chief Gibraltar Government Representative in London. He was born on 18 August 1946 in Ballymena, Northern Ireland. During the war his father was a member of the Security Police in Gibraltar, as was his uncle, who was tragically killed whilst on duty by a bomb on arrival in Tangiers.

The interview begins with Albert Poggio tracing his ancestry back to 1736 of Genoese and Italian origins, along with his Jewish roots from Morocco on his mother’s side. He talks about the evacuation first to Tangiers and then to Northern Ireland, where the family remained until 1953. He recalls some early childhood recollections of the Bedenham explosion and the arrival in the Harbour of the British Mediterranean Fleet. He describes his schooling and how Catholic and Jewish faiths had a major impact upon his life.

During the interview, he goes on to describe the changes in Gibraltar since the war and his own career, first as a successful businessman and later in politics as Gibraltar developed from being a Colony into the self-governing British Overseas Territory it is today. 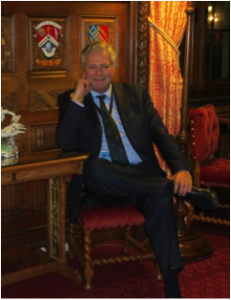