Lilian Baker was born in Gibraltar. During WWII she was evacuated to Casablanca and then to London. The family were allocated rooms in The Kensington Palace Hotel. She describes life at the hotel, meals, sheltering in the basement from the bombing. She went to school at the Victoria and Albert Museum and is in the photograph of the Gibraltarian children sitting on the steps of the museum. She went on to the Convent of the Sacred Heart in Hammersmith and remembers being worried for the safety of her school friends after a bombing raid. The family was then evacuated to Northern Ireland. The family returned to Gibraltar after the war. She was in Gibraltar at the time of the Bedenham explosion. She speaks about social life and culture in Gibraltar, the relationship between the military and the Gibraltarians, close knit communities, and meeting her husband Paul Baker [who is also part of The Friends of Gibraltar Oral History Archive]. 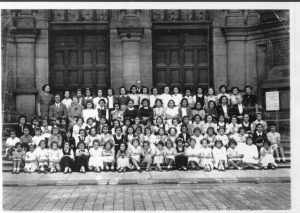